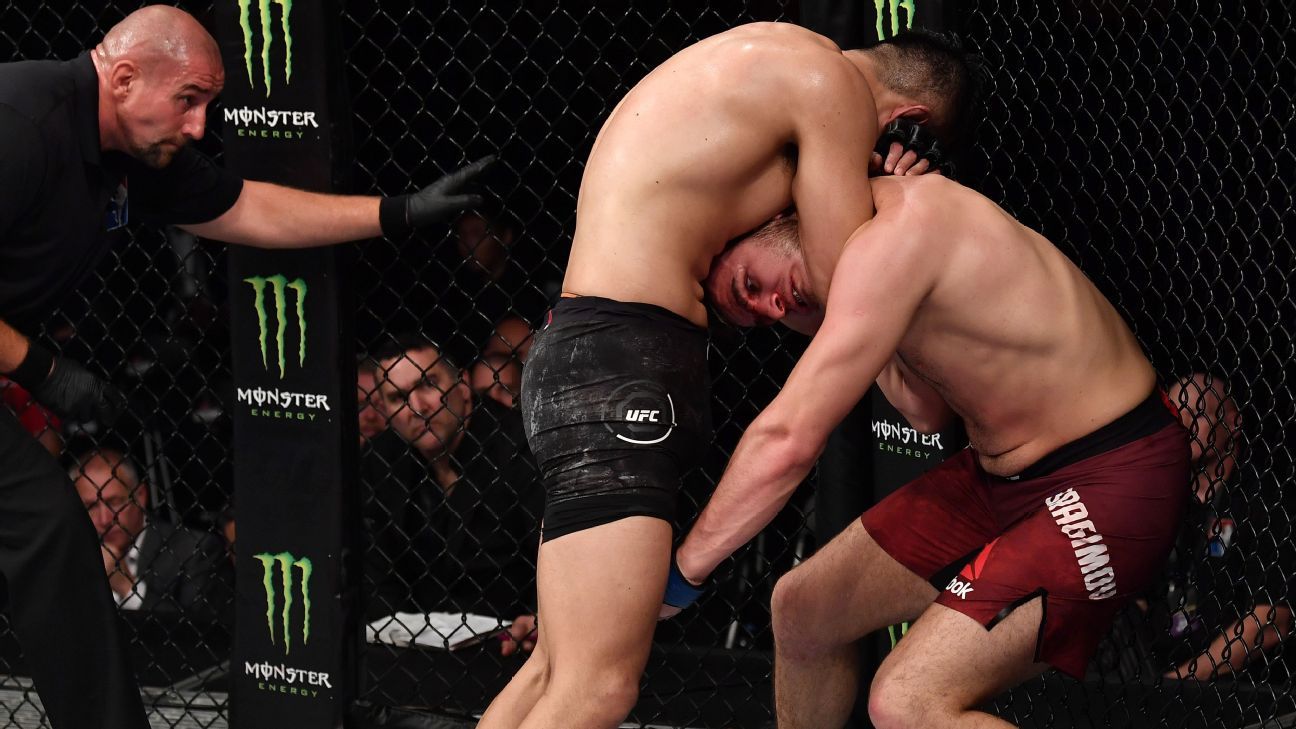 The UFC’s winningest Chinese fighter did not disappoint in front of the fans in his home country.

Li Jingliang stopped Elizeu Zaleski dos Santos via TKO at 4:51 of the third round Saturday in the co-main event of UFC Shenzhen. Li landed an uppercut during a striking exchange that sent Zaleski dos Santos scrambling into the cage. He followed up with big hooks from the left and right side until Zaleski dos Santos dropped again and the bout was called off by referee John Sharp.

The bout was close up until that point. Li dropped Zaleski dos Santos in the first round with a right hand, the first significant blow of the fight. Zaleski dos Santos had a better showing in the second with some solid combinations, but Li circled to the right, away from his opponent’s power hand.

The third round was completely up for grabs until Li landed the uppercut that sent Zaleski dos Santos reeling.

Li (17-5) has won three in a row and seven of his last eight. His nine wins are the most out of any other Chinese fighter in UFC history. This was his sixth UFC fight by TKO/KO since 2014, tied for the most in the welterweight division in that time. He was a +220 underdog heading into this fight.

Zaleski dos Santos (21-6) had his seven-fight winning streak snapped by the loss. The Brazilian fighter who came in ranked No. 14 among welterweights in the UFC,had finished his last three opponents.

Kara-France was the favorite if the fight stayed on the feet. If it went to the canvas, De La Rosa would have had the advantage. Kara-France stayed upright and that was the difference in the bout, leading to a unanimous decision (30-27, 30-27, 29-28) win in a battle of flyweight contenders.

He set the tone right away in the first round when he stuffed a good takedown attempt from De La Rosa, reversed it and ended up slamming De La Rosa down.

De La Rosa, a very good wrestler, wasn’t able to get Kara-France down in the first and didn’t try after that.

In the second, Kara-France dropped De La Rosa with a big right hand and continued with a low kick onslaught to De La Rosa’s lead leg. De La Rosa had his own moments, putting together good boxing combinations in the second round, which opened up a cut near Kara-France’s left eye.

Kara-France opened up with a big flurry in the third round that cut De La Rosa and essentially sealed the victory.

Kara-France (20-7) has won eight straight, including his first three in the UFC. The 26-year-old New Zealand native is tied for the second longest active winning streak in the division with Joseph Benavidez and Matt Schnell. Champion Henry Cejudo is tops with four in a row.

With 45 seconds left, both fighters stood across the cage from each other, glanced at the the clock and took a deep breath. It seemed like a final-second flurry was being prepped by either Krantz, Song or both. But it never came. The two men gave everything they had and were too gassed to muster anything else as the fight came to a close.

Song gutted out the unanimous decision (29-28, 29-28, 29-28) victory in a close welterweight fight in which both men went all out in separate sequences. It was just Song’s second career decision win and his first since 2014.

The first round was tight, filled with entertaining striking exchanges. Krantz succeeded in the second when he was able to get Song down by slamming his way out of a guillotine choke attempt. Song stole momentum back in the third and bloodied Krantz with some hard combinations.

Krantz was exhausted over the second half of the third round, but Song was too tired himself to pour it on.

Song (15-5) has won three of four fights in the UFC. The 29-year-old Chinese fighter was on a two-fight losing streak before he made his debut in the UFC in 2017.

Long one of the most vaunted strawweight prospects, Mizuki finally has her first UFC victory. At flyweight.

Mizuki defeated Wu via split decision (28-29, 29-28, 29-28) in a fairly one-sided performance despite the one card going the way of Wu. Mizuki pressured the entire way and landed combinations and solid right hands throughout. Wu, who missed weight by three pounds Friday, had her best round in the third when she landed a hard combination and right hand that stopped Mizuki in her tracks.

Mizuki (14-5) has now won two straight and six of her last seven. The 25-year-old Japanese fighter has competed her whole career (since she was 16) at 115 pounds, but has had issues making weight recently and made her UFC debut here at 125. It’s expected she will move back to strawweight in the future.

Hernandez, whose nickname is “Fluffy,” got lit up on the feet early by Park, but made adjustments, focused on getting Park to the ground and ended up with a submission victory.

The anaconda choke finish came at 4:39 of the second round.

Park landed big combinations early in the first. By the end of the round, Hernandez already made a commitment to going for takedowns. They didn’t come cleanly right away, but he remained persistent into the second. Park bloodied him with punches leading off the round, yet Hernandez was relentless trying to get things to the mat. Eventually he did with a big slam, transitioning to a front headlock and then into a the submission attempt.

Hernandez (7-1) earned his first UFC victory after suffering his first career loss in his last fight. The 25-year-old California native is the former LFA middleweight champion.

Park (10-4), a 28-year-old South Korea native, was making his UFC debut and had his seven-fight winning streak snapped.

Sumudaerji might have saved his spot in the UFC with an impressive performance.

The Chinese fighter dominated Soukhamthath from start to finish with quick, precise striking en route to a unanimous decision victory (30-26, 30-26, 30-25).

Soukhamthath told his corner that he broke his hand in the first round and he was not really effective after that. Sumudaerji busted Soukhamthath’s nose in the second round and dropped him in the third. He was close to finishing with ground and pound in the closing minutes, but Soukhamthath survived.

�� “That must’ve been a 25-punch combination.” – @bisping pic.twitter.com/5IwkxXTIfZ

Ibragimov threw everything at Jung in the first round and couldn’t put him down. Jung came back against a tired, bloody Ibragimov in the second, but failed to finish him.

The back-and-forth light heavyweight fight’s finish in the third round was just as wild as the rest.

With Ibragimov pushing Jung against the cage working for a takedown, Jung grabbed onto an opportunistic standing ninja choke. Ibragimov could not escape and had to tap at 2:00 of the third round.

“I honestly think my opponent didn’t take me so seriously and thought I couldn’t weather the storm when I clearly could,” said Jung.

Ibragimov (8-1), a 24-year-old Russian prospect, was coming into the UFC off four straight wins in M-1 Challenge, all via finish.

Ismagulov has earned himself a step up in competition.

The Kazakhstan native defeated Moises via unanimous decision (30-26, 30-27, 30-27) in a one-sided bout. The impressive Ismagulov was the quicker, more accurate striker with the better length. Moises landed some solid right hands but was on the receiving end more often than not.

Ismagulov dropped Moises in the first round with a jab and kept the pressure on throughout, doing damage to Moises’ lead leg and body with kicks. An Ismagulov left hand wobbled Moises again in the third. It was a clear decision victory.

Ismagulov (19-1) has now won three in a row in the UFC and seems like he could be a factor at lightweight. The 28-year-old Russia resident has won 14 straight overall.

The fight between the two Mongolian athletes was mostly even on the feet through the first two rounds. Alatengheili was able to get things to the mat in the third to seal a unanimous decision (29-27, 29-27, 29-27) victory.

After landing with hard right hands that busted up the left side of Batgerel’s face in the first round, Alatengheili slowed down in the second. Batgerel took momentum and wobbled Alatengheili in that round. In the third, after some fun striking exchanges, Alatengheili took Batgerel to the ground twice and landed some solid ground and pound.

Alatengheili (13-7-1) has won three straight. The 27-year-old making his UFC debut has been training at the new UFC Performance Institute in Shanghai.

Batgerel (6-2), a 30-year-old who trains in Mongolia, had a two-fight winning streak snapped. Batgerel was also making his UFC debut.

Score one for Jessica Andrade’s team to kick off UFC Shenzhen.

Rosa picked up a split decision (28-29, 30-27, 29-28) win over fellow Brazilian Procopio in the China card’s opener. A big right hand from Rosa that dropped Procopio in the third round was likely the difference, at least on the deciding judges’ scorecard. The bout was fairly even, with both having their moments until Rosa pulled ahead in the third.

Rosa (12-3), a teammate of Andrade at Paraná Vale Tudo, has now won three straight. The 24-year-old bantamweight prospect was making her UFC debut.

Procopio (6-1) was undefeated coming into her UFC debut here. The 23-year-old was fighting outside of Brazil for the first time.

The duo combined for a UFC women’s bantamweight record 336 significant strikes. The previous record was 294, done by Andrade and Rosi Sexton in October 2013.