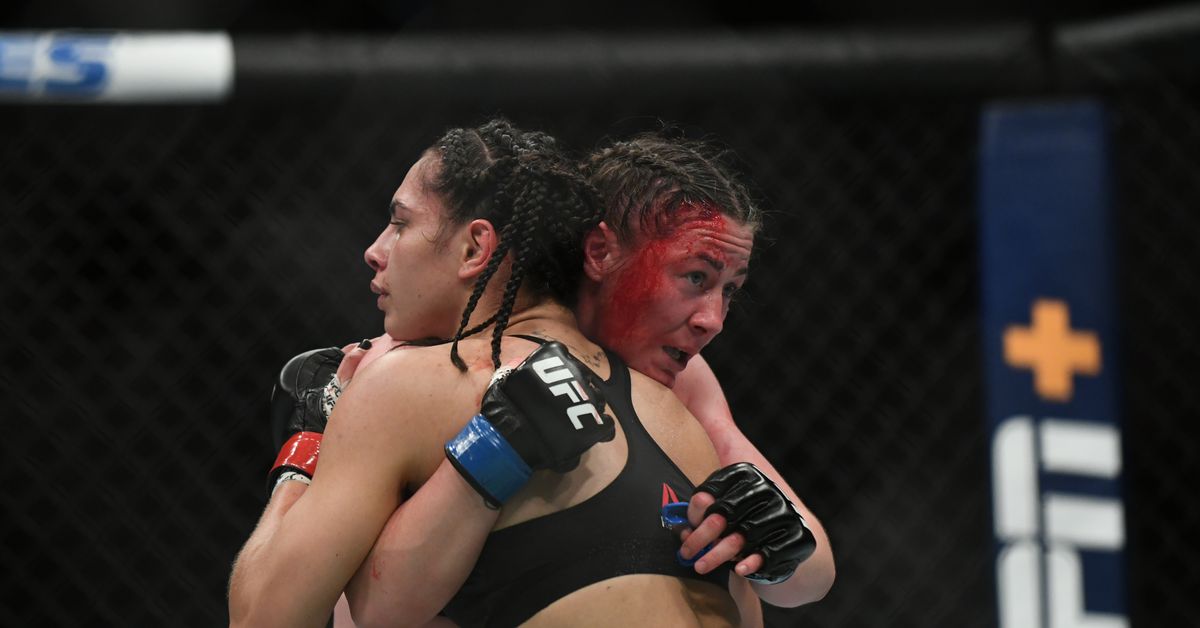 Molly McCann overcame a bout with anxiety following a loss in her UFC debut and now finds herself on a two-fight win streak ahead of her UFC Boston clash with newcomer Diana Belbita on Oct. 18.

“Meatball” got back to winning ways following her hometown defeat to Gillian Robertson by claiming victory over Priscila Cachoeira. The former Cage Warriors champion then outclassed former KSW champion Ariane Lipski to add to her purple patch.

Although McCann knows that victory over Belbita would put her on a significant run in terms of the flyweight division, lessons learned from her debut have taught her to remain focused on the task at hand.

Bucking her trend of never refusing a fight, McCann revealed that she did turn down a short-notice offer to compete on this weekend’s UFC Shenzhen card. An offer to fight in Boston came shortly after, which justified McCann’s new rule of only doing “what feels right” in terms of her fighting career.

“I turned down a fight…I got a short-notice fight a week before I went to Greece and it’s the only fight I’ve ever turned down. I just thought, ‘I cannot miss this wedding’. [The fight] was for China on August 31st and I just thought, ‘I’m not rushing it now, I’m only doing what feels right’. Then [UFC] came back with the Boston fight,” she explained.

“In my eyes, I was tested in my first [UFC] fight and I lost. It tested everything about me: my strength of character, my resilience and my mental fortitude. The UFC London fight was more about my willingness to win and [showing people] that you’re going to have to put me to sleep to ever beat me. The last fight proved that I am a fighter. This [Boston fight] is the one that makes me feel no pressure. I know how good I am now, I know that I’m meant to be here…and I know I’m going to f*ckin’ finish her.”

McCann believes that the UFC are in rush to pit her against the top-ranked fighters at 125-pounds, but she heaped praise on champion Valentina Shevchenko and underlined the new found belief she has in herself on the back of the Lipski win.

“If it came down to me and her…I know how good Joanna Jedrzejczyk is and she got done. I feel like I’m a bit stronger, a bit smaller and a bit more compact. She won’t take me down and it would be a stand-up fight most definitely. She hasn’t fought anyone with footwork like me. She can try kick me in the head and knock me out, but I’ll bounce straight back up off the floor. There will be no quit and I just think it would be an unreal fight,” she explained.

“As I’m ascending, I feel like by the time I get to her she might be on the descent. I just can’t see the UFC rushing me or throwing me in because I’m four fights deep and I’m still not fighting top 15. I don’t know what their plan is. Look, she’s an unreal mixed martial artist but it’s all propaganda at the end of the day. What I learned from my last fight with Ariane Lispki was…the internet said all this stuff about me like I’d be out of my depth and that I only scrapped it against Cachoeira. I just went in and exceeded everyone’s expectations. I stuck to a game plan, I was five inches off her in reach with my hands and I was four inches off her reach in height. I should’ve never been able to get in on this girl and I still did. I’m always going to give the ultimate best version of what I can give and be the best version of myself that I can. Scousers don’t turn down fights or are put off, we think we’re the best in the world and we can beat anyone. And why not? I’m not in this to just have a go and to make the top five — I’m in this to make history.”

Check out the latest episode of Eurobash. The Molly McCann interview begins at 40:00.

Ryan Bader tells Jon Jones he would “love to run it back” in Bellator
Hannah Cifers Growing Into Herself
UFC Fight Night viewers guide: What Tyron Woodley will we see against Gilbert Burns?
UFC On ESPN 9 Odds, Under Dogs And Best Bets!
Nunes-Spencer finalized as full UFC 250 card set