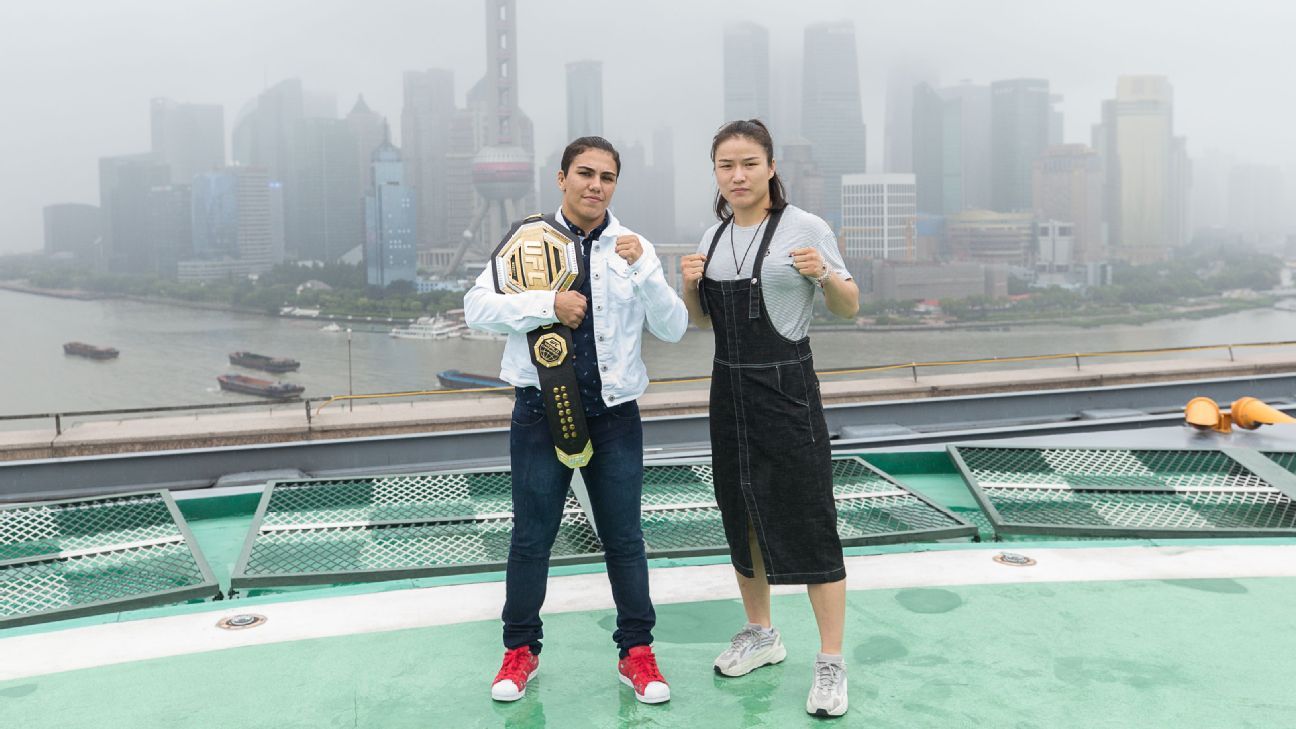 For the second time this month, a UFC title will be defended outside North America.

Jessica Andrade will put her UFC women’s strawweight belt on the line against Zhang Weili in the main event of UFC Shenzhen on Saturday in China. Andrade is coming off a slam knockout win over Rose Namajunas at UFC 237 in April to win the gold. Zhang, meanwhile, will have her home country crowd behind her. She is a blue-chip prospect who has not lost a bout since her pro debut in 2013.

Follow along below with results, recaps and analysis for the entire UFC Shenzhen card, which begins with the prelims at 3 a.m. ET on ESPN. The main card kicks off at 6 a.m. ET on ESPN+.

The fight between the two Mongolian athletes was mostly even on the feet through the first two rounds. Alatengheili was able to get things to the mat in the third to seal a unanimous decision (29-27, 29-27, 29-27) victory.

After landing with hard right hands that busted up the left side of Batgerel’s face in the first round, Alatengheili slowed down in the second. Batgerel took momentum and wobbled Alatengheili in that round. In the third after some fun striking exchanges, Alatengheili took Batgerel to the ground twice and landed some solid ground and pound.

Alatengheili (13-7-1) has won three straight. The 27-year-old making his UFC debut has been training at the new UFC Performance Institute in Shanghai.

Batgerel (6-2), a 30-year-old who trains in Mongolia, had a two-fight winning streak snapped. Batgerel was also making his UFC debut.

Score one for Jessica Andrade’s team to kick off UFC Shenzhen.

Rosa picked up a split decision (28-29, 30-27, 29-28) win over fellow Brazilian Procopio in the China card’s opener. A big right hand from Rosa that dropped Procopio in the third round was likely the difference, at least on the deciding judges’ scorecard. The bout was fairly even with both having their moments until Rosa pulled ahead in the third.

Rosa (12-3), a teammate of Andrade at Paraná Vale Tudo, has now won three straight. The 24-year-old bantamweight prospect was making her UFC debut.

Procopio (6-1) was undefeated coming into her UFC debut here. The 23-year-old was fighting outside of Brazil for the first time.

The duo combined for a new UFC women’s bantamweight record 336 significant strikes. The previous record was 294, done by Jessica Andrade and Rosi Sexton in Oct. 2013.