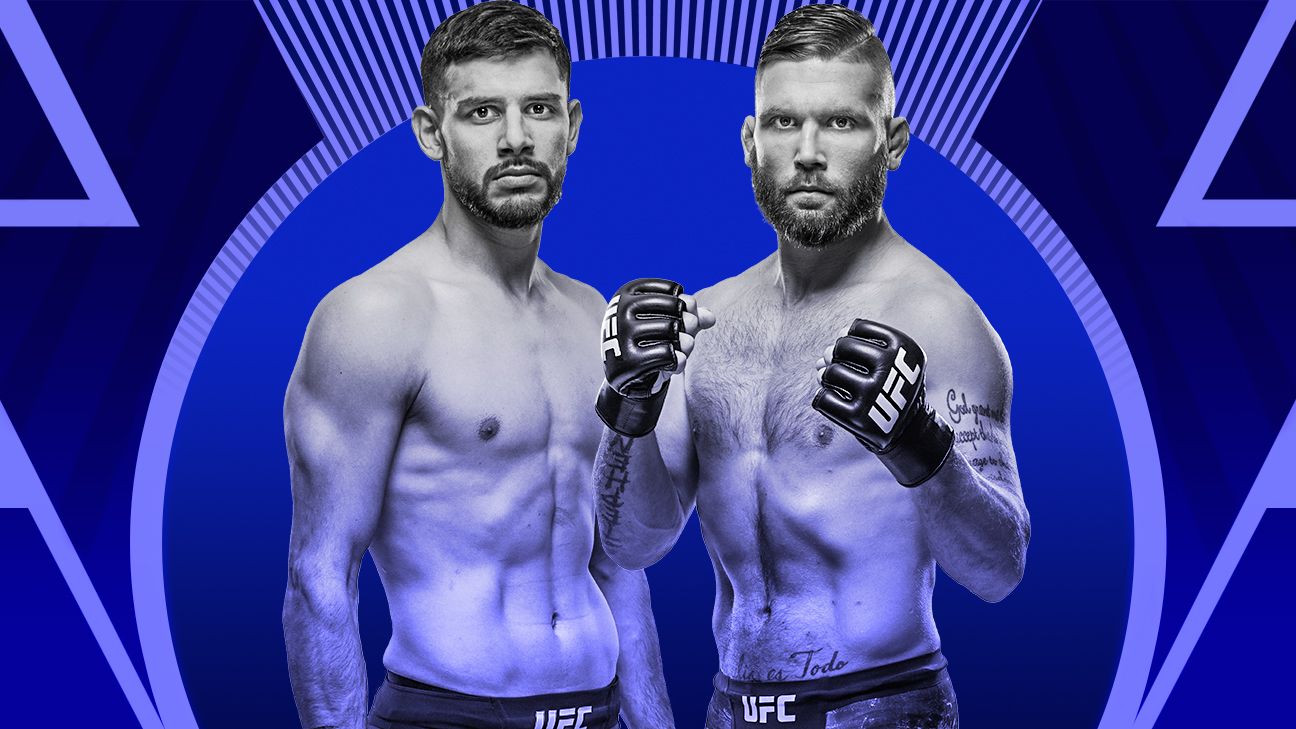 Yair Rodriguez‘s potential has been as clear as day from the moment we first saw him — and now is the time to see where it’s going.

Rodriguez (12-2) is set to meet veteran featherweight Jeremy Stephens (28-16) on Saturday in the main event of UFC Fight Night in Mexico City. It will mark the 26-year-old’s first appearance in 2019 — and first since his remarkable no-look, backward elbow knockout of Chan Sung Jung 10 months ago in Denver.

The first impression many of us had of Rodriguez came in 2014, when he won “The Ultimate Fighter” reality series as a flashy, baby-faced, 21-year-old prospect. He’s gone 7-1 in the UFC since the show and cracked the UFC’s rankings.

The last time Yair Rodriguez competed in the Octagon, he flattened “The Korean Zombie” with 1 second remaining in their fight. On Saturday, Rodriguez could be involved in another memorable clash, with hard-hitting veteran Jeremy Stephens opposing him in the UFC Fight Night main event in Mexico City.

There’s really no perfect route for a young prospect’s career to take, in terms of gaining experience, but when you consider Rodriguez’s path thus far, there’s reason to believe he’s poised for a breakout. He’s accumulated valuable time in the cage (eight fights, across two countries). He conquered an old legend, BJ Penn, and was humbled by another legend, Frankie Edgar. He took a five-round main event against Jung on two weeks’ notice, and went 25 hard minutes. He, intelligently, took time off in 2019 to fully heal.

He’s bounced around different training environments over the years. There was JacksonWink MMA in Albuquerque, New Mexico. Donald Cerrone‘s “BMF Ranch.” A more personalized camp in Chicago. This time, he invested $30,000 to take his closest-knit coaches to Mexico six weeks ahead of time, and train at altitude.

You look at his résumé and you see the valuable experiences that can transform a talented, flashy prospect into a bona fide title contender. Rodriguez is entering the prime years of his career. This matchup, against a hungry veteran who is known for hurting his opponents in the Octagon, might end up telling us a lot about Rodriguez’s future.

31: UFC fights for Stephens (as of Saturday), putting him in third place all time behind Donald Cerrone and Jim Miller (tied at 33). Stephens is currently tied at 30 with Diego Sanchez, Demian Maia and Andrei Arlovski.

18: UFC knockdowns by Stephens, tying him with Anderson Silva for second-most in history, behind Cerrone (20). Stephens has eight wins by KO/TKO.

7: UFC wins for Rodriguez, tied for second among featherweights since 2014, and tied for most among Mexican-born fighters.

8: Submission attempts in the UFC for Rodriguez, tied for sixth among active featherweights.

6:05:23: Total UFC fight time for Stephens, tying him for sixth all time. The leader is Frankie Edgar, at 7 hours, 12 minutes, 33 seconds. If Stephens goes the distance on Saturday, he will take over second place.

A look back: The no-look elbow KO

For an inside look at this epic finish by Rodriguez, click here.

“I have a little bit of Mexican blood. They wanted to put me on this card because I fight like 100% Mexican. I fight with passion. I fight with raw heart.” –Stephens, speaking to ESPN

Man, how is Stephens not 57 years old? It feels like he’s been around since the dark ages of this sport. He’s fought virtually everyone in his weight class. And yet he’s only 33, and when you listen to this man talk, he’s as hungry as a 25-year-old. He has the style to give Rodriguez problems. Rodriguez likes to be in space, where he can best use his length, creativity and speed. Stephens is known for walking his opponents down. This is a fun, pick ’em fight. Ultimately, I lean youth. Rodriguez via decision.

Waiting in the wings

Everyone beneath the very top of the 155-pound division will be paying attention. Stephens is No. 9 in ESPN’s featherweight rankings, and while a victory would not propel him all the way up the ladder, it would boost him up a rung or two. For Rodriguez, the 2017 loss to No. 8 Frankie Edgar halted some serious momentum. He’d won eight in a row going in, and after that bump in the road, he had a hard time with seventh-ranked Chan Sung Jung before pulling off his last-second miracle KO. A win Saturday would surely catch the eye of all those above.

You want a name, though, right? That’s a tough call. Stephens has already lost to Jose Aldo and Zabit Magomedsharipov. Rodriguez has lost to Edgar and defeated Jung. One guy neither has fought: Brian Ortega, who sits at No. 3 in the ESPN rankings. Let’s assume “T-City” will be watching.

What else to look for … beyond the main event

The co-main event is the only fight on Saturday’s card that pits a fighter in ESPN’s divisional rankings against another ranked fighter. Alexa Grasso is No. 9 among strawweights, ex-champion Carla Esparza No. 10.

Grasso (11-2), a 26-year-old native of Guadalajara in the Mexican state of Jalisco, is coming off a victory in June over Karolina Kowalkiewicz.

Esparza (15-6) ended a two-fight losing streak in April with a decision victory over Virna Jandiroba. She is 31.

Tyson Nam has been a professional fighter since 2006. In those 13 years, he sure has gotten around — 28 career bouts spanning 17 promotions. The UFC and Bellator are not among those promotions, although years ago he signed with (but never fought for) Bellator and drew interest (but never a contract) from the UFC.

Nam has, however, done some things that got the attention of longtime fans of those top-tier fight promotions. In 2012, he knocked out then-Bellator bantamweight champion Eduardo Dantas, though the bout took place in the Shooto Brazil promotion and therefore was a non-title fight. Two years ago, Nan KO’d onetime UFC flyweight title challenger Ali Bagautinov.

And now, finally, the 35-year-old Hawai’ian is getting his shot in the UFC — as a late-replacement opponent for Sergio Pettis.

A few more things before you go …

Some random notes, courtesy of the voracious researchers at ESPN Stats & Information: