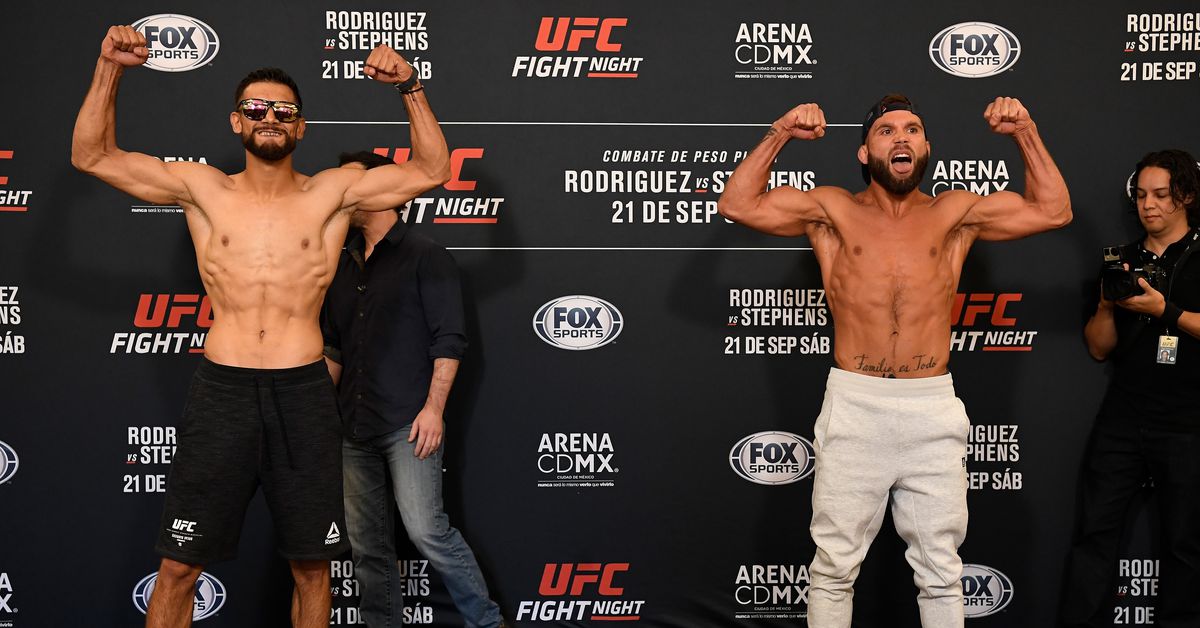 Ultimate Fighting Championship (UFC) will return to the hurt business later tonight (Sat., Sept. 21, 2019) to stage UFC Fight Night 159 from inside Mexico City Arena in Mexico City, Mexico, on ESPN+. Headlining the event will be a featherweight showdown between top contenders Yair Rodriguez and Jeremy Stephens. In the co-headlining act, Alexa Grasso will take on Carla Esparza in women’s Strawweight action.

Yair Rodriguez burst onto the UFC scene back in 2014, and right away the promotion knew it had something special. “El Pantera” went on to score six straight wins, even toppling former two-division champion, B.J. Penn, in impressive fashion (recap). What makes Rodriguez so special was his unique fight style, as he clearly isn’t afraid to take risks while showing off some innovative moves. In his first big test, however, Rodriguez came up short to Frankie Edgar, losing to “The Answer” at UFC 211 in the second round after the ringside doctor’s put an end to the beatdown.

His next few months were a bit rocky, as he opted to sit out to recuperate, get his mind right and start fresh. But before he got the chance to step back into the Octagon, he was released from his contract after UFC President Dana White suggested that the Mexican-born fighter turned down several bouts.

After clearing the air, he was back in the mix and was lined up to face Chan Sung Jung at UFC Fight Night 139 in Nov. 2018. Going into the fifth round of that fight, it seemed as if Rodriguez was well on his way to dropping his second-straight bout, which would have been catastrophic for his ascension. But in the blink of an eye, Rodriguez unleashed an upward elbow that clipped a careless “Zombie,” knocking him out right as the final bell rang.

Now, for the first time since his UFC debut, Rodriguez will once again fight in his home country of Mexico, looking to take out one of the heaviest hitters in the division. A win over Stephens would be huge for Rodriguez, and UFC, as the promotion is still trying to find that Mexican-born fighter who can carry the Mexican flag since Cain Velasquez is too busy doing spinning acrobatic stuff in the wrestling ring.

Stephens has had a rough stretch as of late, losing back-to-back contests to Zabit Magomedsharipov and Jose Aldo, and it has subsequently dropped him down a few pegs on the 145-pound pecking order. But his recent woes aren’t indicative of just how dangerous “Lil Heathen” is, as one clean hit can mean lights out for anyone standing across from him.

Stephens has been fighting inside the eight-walled cage for 11 years now, but has yet to come close to a shot at a UFC title. While a win over Rodriguez won’t necessarily put him there, it can be the boost in momentum he needs to get to the big dance.

And if you think Stephens is worried about the home crowd advantage, he isn’t, as he has deep roots in Mexico since his wife and daughter are of Mexican descent, so he is heavily invested in the Latino culture. More important, though, Stephens is as experienced as they come, so Rodriguez won’t be able to catch him off guard with anything fancy. That means if “El Pantera” gets too reckless, “Lil’ Heathen” will be there to capitalize.

To be honest, I can’t really complain too much about this event, as the card — though not stacked by any means — has some decent fights on it. Of course, it is catered to meet Mexican fans’ hunger, so Mexico City will get a good look at all of the rising talent that represents the country.

Ariane Carnelossi stepped in for Istela Nunes to fight Angela Hill after Nunes failed a pre-fight drug test. Marion Reneau was forced out of her fight against Irena Aldana for undisclosed reasons, and was ultimately replaced by UFC rookie, Vanessa Melo.

Sergio Pettis got a new opponent in Tyson Nam after his original foe — Alex Perez — was forced out of the fight with an injury. Other than that, no major injuries were reported prior to this event.

After racking up 10 straight wins to start his mixed martial arts (MMA) career, Askar Askarov finally got the call up to the big show. He won the ACB Flyweight title in the process of his run in the Europe-based promotion, so adding him to UFC’s 125-pound division is a welcomed site for all parties involved. His first test will be a tough one as he will take on Brandon Moreno, who looks to start his second run with the promotion with a bang.

Melo’s UFC career didn’t start off on the right foot, coming in four pounds heavy for her fight against Aldana. Granted, she took the fight on fairly short notice, so she shouldn’t be hit with too much criticism. That said, it still cost her a portion of her purse. Still, Melo is on a nice five-fight win streak, and if she can take out Aldana it will help ease the pain of coming in heavy for her first-ever UFC bout.

Canelossi is a great get for UFC, as she is currently red-hot with an impressive 12-fight win streak, with her lone loss coming in her professional debut five years ago. During her current win streak she has earned eight knockouts and one submission, so she can certainly bring it. While she also got the fight on short notice, she will look to make the best of her opportunity against Angela Hill. “Overkill” has plenty of experience under her belt, but I don’t foresee this going Angela’s way, to be honest, as Ariana has proven she is one tough cookie. So if Angela isn’t careful, she could find herself the owner of two-straight defeats.

Nam got the call up to the big show after Perez was forced out of his fight against Pettis. While facing someone like “The Phenom” on short notice isn’t ideal, Nam is clearly up for the task. And the man can bang, too. He has 10 knockouts to his credit, as the striking department is clearly his specialty. He will find a willing striking partner in Pettis, who also prefers to let it play out on the feet.

To get a better look at all of the UFC newcomers, click here to read Patrick L. Stumberg’s detailed “New Blood” piece.

How The ‘Prelims’ Look:

The undercard of this event will be headlined by Jose Alberto Quinonez taking on Carlos Huachin. Carlos’ UFC debut was spoiled by Raoni Barcelos earlier this year so he’s looking for another opportunity to prove why the promotion called him up to the big leagues in the first place. Quinonez, however, is capable of handing Huachin his second-straight defeat, as he was riding a nice four-fight win streak inside the Octagon before getting choked out in his last outing.

Also, Pettis will look to snap his two-fight losing streak when he faces Nam. Pettis was once headlining cards, and now he has been relegated to the “Prelims” as a result of his recent woes. He is still a dangerous threat, but if he isn’t careful Nam could send him home packing with three straight losses.

Remember when Bethe Correria was fighting for titles, and Sijara Eubanks was demanding championship fights? Well, those days are long gone, as Correria has lost two straight — taking her completely out of the bantamweight title picture — while Eubanks recently got schooled by Aspen Ladd, sending her down to the undercard. That said, whoever comes out on top in this fight could climb back up the 135-pound rankings and regain their momentum entering 2020.

To get a deeper look at all of the “prelims” click here and here.

Who Needs A Win Badly:

Believe it or not, Stephens needs a win in the worst way, as losing three in a row won’t be good for his UFC future. Granted, the promotion is unlikely to cut him should he drop his third in a row, but what they can do is limit his exposure by giving him less-than thrilling contests moving forward. After all, your status as a veteran can only take you so far, so Jeremy has to capitalize on this moment or his days of headlining (or co-headlining) events could come to an end.

Again, it’s not the most stacked card, but the fights are pretty intriguing. In the co-headlining act, Alexa Grasso will look for his second straight win when she faces former 115-pound champion, Carla Esparza. Grasso is another one of those up-and-coming contenders who hasn’t quite lived up to the hype that everyone expected. She is 3-2 so far in her UFC career, alternating wins and losses since making her debut for the promotion in 2016. If she can score a win over the former division queen — who is looking to get back into the mix as well — it will be big for her moving forward.

After suffering two-straight defeats, Brandon Moreno was cut from UFC in 2018. From there, he went on to fight for Legacy Fighting Alliance (LFA), defeating Maikel Perez via knockout. And just like that, Moreno once again found himself under contract with the UFC — though it’s no coincidence he was inked right before the promotion invaded Mexico again. His comeback fight won’t be a walk in the park, though, as he will face undefeated (10-0) Askar Askarov.

Aldana will look to get back into the win column after she had her three-fight win streak snapped by Raquel Pennington last July in a fight that could’ve gone either way. But, that’s how the cookie crumbles sometimes and Aldana will look to remind everyone she is a legit threat to be reckoned with at Bantamweight. Her opponent, Melo, came in heavy for the fight, so she already started her UFC career on the wrong foot. Aldana shouldn’t have too much trouble against Melo in this fight, though she is undoubtedly looking to shock the Mexican fans by handing Aldana her second-straight defeat.

Martin Bravo and Steven Peterson are two fighters coming off two=straight defeats, though they still got a slot on the main card. Call me crazy, but I would have rather put Sergio Pettis vs. Tyson Nam on the main card, as “The Phenom’s” name does carry a bit more weight than these two combatants. Either way, one man will break his funk, while the other will go on two suffer his third-straight defeat, and possibly end his UFC run in the process.

*Fight card, bout order and the amount of matches subject to change.