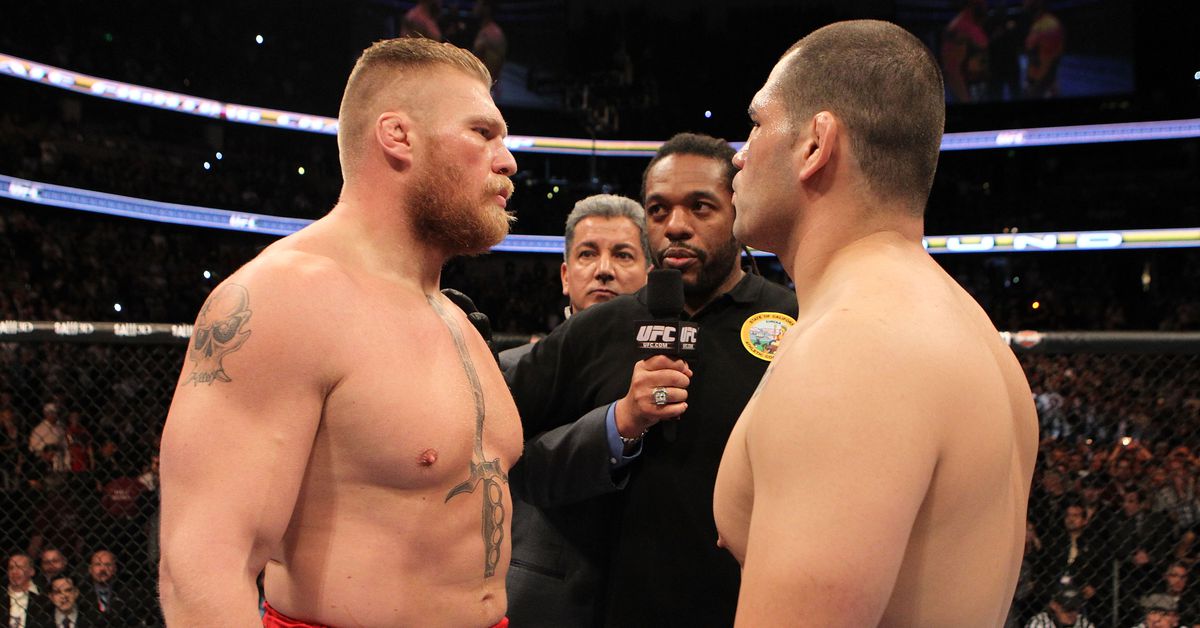 It’s been nine years since Cain Velasquez brutally dethroned Brock Lesnar at UFC 121. Lesnar would fight just twice afterward and take a multi-year hiatus, though rumors of Lesnar’s return to the cage are always prevalent and still occasionally circulate today. Velasquez, meanwhile, would lose the title immediately after, only to recapture the strap and defend it twice. After losing the belt a final time, Velasquez’s injuries kept him sidelined for quite some time, and his attempted return to the cage back in February ended in disaster.

It certainly seemed like no rematch would ever occur given the differing paths of their respective careers, but Velasquez’s sudden success in the squared circle has created new opportunities. Per BIGPLAY writer Josh Carey, the two will compete once more at the upcoming WWE Crown Jewel event on October 31 in Saudi Arabia.

The announcement is expected to be made official this Friday (Oct. 11, 2019). Think Lesnar gets his revenge, or will Velasquez secure another upset win in his new sport?

Islam Makhachev wants a piece of Dan Hooker after “The Hangman’s” big win over Al Iaquinta.

For those wondering the type of cash a top-notch martial artist can pull, Gordon Ryan charges $600 for a one hour private lesson.

I’m not out here searching for dragon ball Z fans, I’m in pursuit of these history books. Being mentioned with history‘s greatest combatants ever. Fucking nerd

All I hear is “I’m a bitch, I dance better than Jones.” Oh and some weird shit about big American balls in your mouth. https://t.co/aLNjHVBsTF

Gilbert Burns’ desire for short-notice fights — and success in them — is quickly building him a reputation.

A well-timed back step is always a thing of beauty, but it’s awesome to watch such a big wrestler pull it off!

I cannot help but include these videos of Nguyen Tran Dhuy Nhat working out in the streets of Saigon… He should probably avoid the gnarly bacteria that’s rampant in flood water though.

Let’s include one more flying submission, this time the classic jump triangle. On a technical note, the grappler using the triangle finishes the submission with the lock on the “wrong” side. Classically, the triangle is finished with the lock on the outside of the shoulder rather than across the back, but both variations can easily put an opponent to sleep if squeezed properly!

It’s not everyday that a body shot sends someone flying across the ring.

Midnight Music: Josh Homme of Queens of the Stone Age recently announced another Desert Sessions album due out on October 25, the first such release in 16 years. In those recordings, Homme and friends — a varying group of musicians that has included folks like Les Claypool, PJ Harvey, and ZZ Top’s Billy Gibbons — take to a small studio in the middle of the desert to quickly write and record songs. As such, I spent most of the day re-listening to the previous volumes.