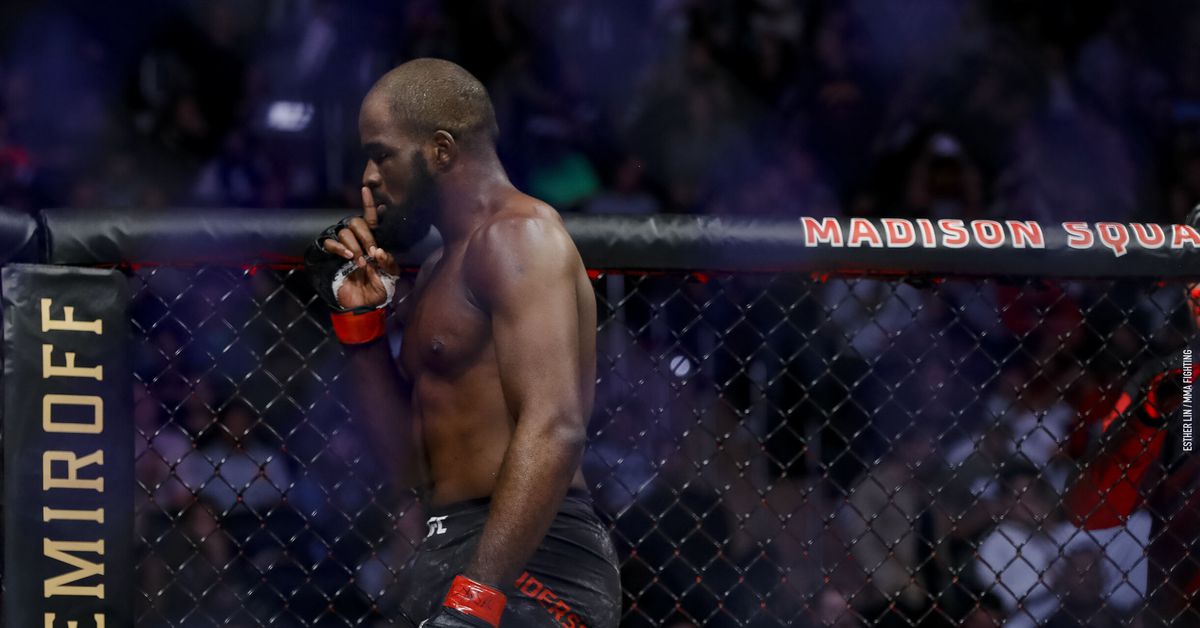 After demolishing “the next big thing” in Johnny Walker, Corey Anderson is taking the opportunity to fire back at his detractors.

The former Ultimate Fighter winner, who at UFC 244 stopped Walker’s hype train, has been a top-10 light heavyweight for quite some time. But he’s also struggled to gain the attention of a higher-ranked opponent, much less convince the UFC he’s ready for a shot at champ Jon Jones.

That’s why Anderson decided to accept the challenge against Walker. The Brazilian had been cast as a potential threat to Jones after three lightning quick knockouts. But Anderson needed less than one round to finish Walker.

Now, Anderson is taking aim at the fighters who had no interest in facing him for the better part of the past year. The person at the top of that list is Jones, who more or less scoffed at the idea of giving Anderson a shot at the title despite three straight wins that included Ilir Latifi and former title contender Glover Teixeira.

Jones acknowledged Anderson’s recent win, but he subsequently released a statement on social media declaring he prefers to face undefeated light heavyweight contender Dominick Reyes in his next fight.

Even before Jones released that message, Anderson saw it coming.

“I’ve been saying it since last year when I called for the fight,” Anderson said of Jones in an interview with MMA Fighting. “He tweeted me saying, ‘You want the smoke?’ I answered back I want it right now. All of a sudden, he started dilly-dallying around my name, calling other people out. He’s avoiding me. He called me out thinking I would hesitate. I want that. I need that. I wanted that when I came here.

“When you look back at UFC 181, I beat Justin Jones, and I said back then I beat a Jones, but the goal is to beat the Jones with the belt. I want it. I think he knows it’s a dangerous fight. It’s a risky fight.”

As much as Anderson wants to fight for the belt, he’s already conceded Reyes will likely get the next shot, because timing works in his favor.

The 30-year-old Illinois native planned on taking a break with his family for the holidays, but he expected Jones would end up favoring Reyes regardless of his readiness for the fight.

“All these guys he fights are one-dimensional,” Anderson said about Jones’ choice in opponents. “Dominick Reyes is a great striker, but he doesn’t have the best wrestling defense. He has OK jiu-jitsu. Thiago [Santos], we knew he was a striker, but that was it. We knew Anthony Smith, his only chance was if you gas out and you let him get you down or some sh*t, or he gets you at the end.

“But when you’ve got a guy like me who has the cardio, who has the striking, and has the wrestling the same or better than Jon Jones, as well as the jiu-jitsu that can match him, then it’s like, that’s a tricky fight — does he want that fight right now, or does he want to keep getting these easy wins, stack his bread and keep breaking records?”

All signs point to Jones taking on Reyes next. But Anderson is happy to bide his time in hopes that he will get the chance to face the winner in 2020. He’s not all that interested in the long list of fighters he called out who couldn’t be bothered to even say his name in response. That includes former title challenger Anthony Smith.

Smith, who was routed by Jones in March at UFC 235, was rather vocal about Anderson in the days following his fight at UFC 244.

“Get off my wave baby, it’s my time,” Anderson said of Smith. “I called every single one of those people in front of me out. From Jon Jones to DC [Daniel Cormier], Jan Blachowicz, Anthony Smith, Thiago, Dominick Reyes, I called them all out for nine months straight, and every single one of them avoided it. They said other names, but nobody said me, or they had to say, ‘I don’t want to fight Corey Anderson.’

“Well guess what? I don’t want to fight you now. It’s my time. I earned this. So after I get my shot whenever it is, then they can come fight me for the belt. Come on. Until then you’ve had a whole year to say yes, and you picked every other fight. Dominick Reyes, they offered me him, and now all of a sudden his nose is broke. Two days later he was looking for a fight. Everybody tries to avoid me. Now I’m hot, and they want to ride my waves. Get off my coattails.”

One fighter who did get Anderson’s respect was former light heavyweight champion Daniel Cormier, who sent out a congratulatory message after previously discounting him as a legitimate threat to the title.

“I loved it,” Anderson said in response to Cormier. “That was the coolest thing. I let those comments from him, all the negative stuff that people said about me after I got knocked out, I studied them and I watched them and I let them fuel me. I knew at one point I was going to come back and people were going to have to respect me, including Jon Jones, and now we’re here.

“The time is here. They have to put respect on my name, because otherwise I might do to them what I did to [Johnny] Walker.”