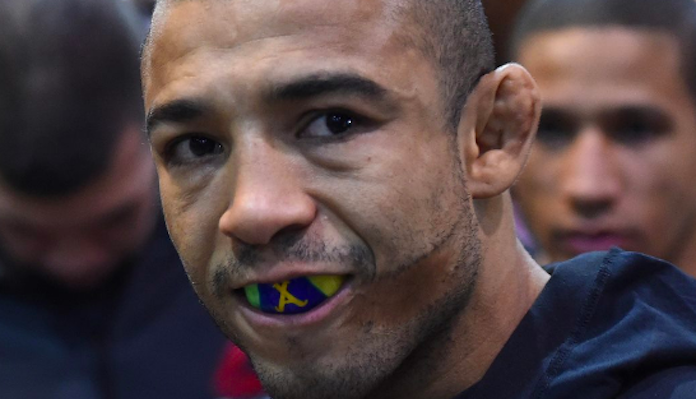 Former UFC featherweight champion Jose Aldo will make his bantamweight debut at this month’s UFC 245 event when he squares off with Marlon Moraes.

Aldo’s decision to drop down a weight class caught many by surprise, as the Brazilian has always struggled making the featherweight mark of 145-pounds. In addition, Aldo had previously expressed interest in moving up a division to join the UFC’s stacked 155-pound ranks.

While many fans and analysts have cast their respective doubts that Jose Aldo will be able to hit the required 136-pound limit at UFC 245, the former title holder says he is already at the final stages of his cut.

“The process is still going on, we’re entering the final stage now,” Aldo said. “The weight cut is going smooth. I thought it would be more complicated since I never went through a diet before, never did something like this. I usually just cut weight during fight week, but this time I had a diet. Man, as incredible as it sounds, I’m feeling great, fast, stronger, so it’s been fine. I have the support of great professionals by my side so everything will be alright.”

Nearly thinned out to his desired new weight, photos have recently emerged of Aldo that have some fans quite concerned.

Check out those photos of Aldo below courtesy of TSN‘s Aaron Bronsteter.

Here is another recent photo of the Brazilian legend (via thefightgame88 and @gian_411).

How does Jose Aldo look in his cut down to 135? pic.twitter.com/8BwRr1FRWx

Thoughts on recent picture of Jose Aldo a little over a week until his Bantamweight debut? #UFC245 #MMA #MMATwitter pic.twitter.com/476O1GM5Um

Jose Aldo (28-5 MMA) was last seen in action at May’s UFC 237 event in Rio, where he suffered a unanimous decision loss to Alexander Volkanovski.

Prior to the setback, Aldo was coming off back-to-back stoppage victories over perennial featherweight contenders Renato Moicano and Jeremy Stephens.

Meanwhile, Marlon Moraes (22-6-1 MMA) will be returning to the Octagon for the first time since suffering a TKO loss to Henry Cejudo in his bid for the promotions bantamweight title at UFC 238. Prior to the setback, ‘Magic’ was coming off a first-round submission victory over perennial contender Raphael Assuncao.

What do you think of the recent photos of former UFC Champion Jose Aldo? Do you think moving to bantamweight is a good idea for the Brazilian legend? Sound off in the comments section PENN Nation!