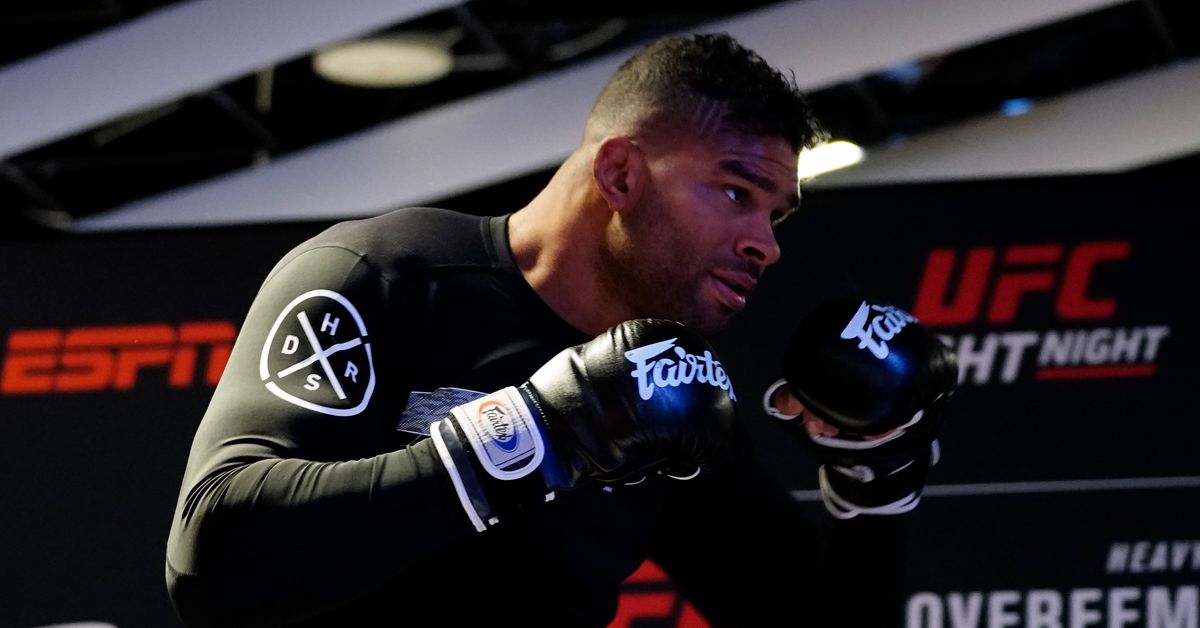 The organization’s smallest division joins its biggest one with a co-feature between rising strawweight contenders Marina Rodriguez and Cynthia Calvillo. Other main card highlights include a pair of electric bantamweight showdowns, Song Yadong vs. Cody Stamann and Rob Font vs. Ricky Simon

We’ve got our usual Prelim analysis here and here, plus another dive into the seedy-but-ever-so-tempting underbelly of MMA gambling here. Once you’re done catching up on that, let’s dig into the main course.

There comes a point in every red-hot knockout artist’s career that he has to face the music, and by “music” I mean “someone with serious grappling chops.” Considering the way a one-note striker in Junior Albini utterly dominated Rozenstruik on the mat before getting lit up to start the second, that Sword of Damocles is still dangling merrily over “Bigi Boy’s” head.

That’s not to say that Rozenstruik hasn’t had to deal with functional wrestlers, though; both Allen Crowder and the modern incarnation Andrei Arlovski tend to lean on their takedowns. Rozenstruik simply avoided the issue by rendering the two of them unconscious before they had a chance to test his hips. Overeem is more than chinny enough to suffer a similar fate, but the current movement-heavy incarnation of the Dutchman is far less liable to march into the pocket with his chin in the air. Rozenstruik will have to pursue his quarry, likely opening himself up to a fight-ending takedown in the process.

Don’t let Overeem’s underwhelming wrestling numbers fool you; he manhandled a very capable Greco-Roman practitioner in Sergey Pavlovich two fights back and can assuredly do the same to Rozenstruik. Once he gets on top, it’s curtains.

That said, Rozenstruik absolutely has the kickboxing skills to potentially find his man’s chin and the sheer power to put “The Reem” in traction with even the most glancing of blows. He’ll have to do all of that without getting hurled to the mat and brutalized in the process, though, and what he’s shown in the Octagon hasn’t been enough to convince me that he can do so. Overeem sidesteps Rozenstruik’s lethal punches by dragging him down and pummeling him into submission.

Man, Rodriguez has really come out of nowhere to take the division by storm. Brutalizing Jessica Aguilar may not be much of an accomplishment at this stage of “JAG’s” career, but taking Tecia Torres apart certainly is. Rodriguez shrugged off seven takedowns from the “Tiny Tornado” and comprehensively outclassed her at every range.

None of that guarantees victory over Calvillo, though. Even with the reduced luster from her loss to Carla Esparza, she’s still a potent submission threat with the wrestling chops to trouble most of the division. Between her mediocre striking and the success Rodriguez had against Torres’ takedown onslaught, though, this looks to be a rough matchup for the Alpha Male product.

Rodriguez’s height and reach advantages figure to play a pivotal role in their standup engagements, and if Calvillo does manage to muscle her way inside, she’ll have to deal with Rodriguez’s hailstorm of a clinch to get anything done. The fact that Calvillo can smoke her from top position won’t make much of a difference when her attempts to get there will result in eating an onslaught of knees and elbows.

Rodriguez’s struggles off of her back against Randa Markos give Calvillo an avenue of victory, but she’s probably in for an unpleasant evening as Rodriguez sprawls-and-brawls her way to a dominant striking victory.

For analysis of the remaining main card fights check out our “X-Factor” preview right here.

MMAmania.com will deliver LIVE round-by-round, blow-by-blow coverage of the entire UFC on ESPN 7 fight card on Sat. (click here), starting with the ESPN+ “Prelims” scheduled to begin at 6 p.m. ET, and continuing with the undercard portion on ESPN proper at 7 p.m. ET (main card begins at 9 p.m. ET on ESPN).

To check out the latest and greatest UFC on ESPN 7: “Overeem vs. Rozenstruik” news and notes be sure to hit up our comprehensive event archive right here.