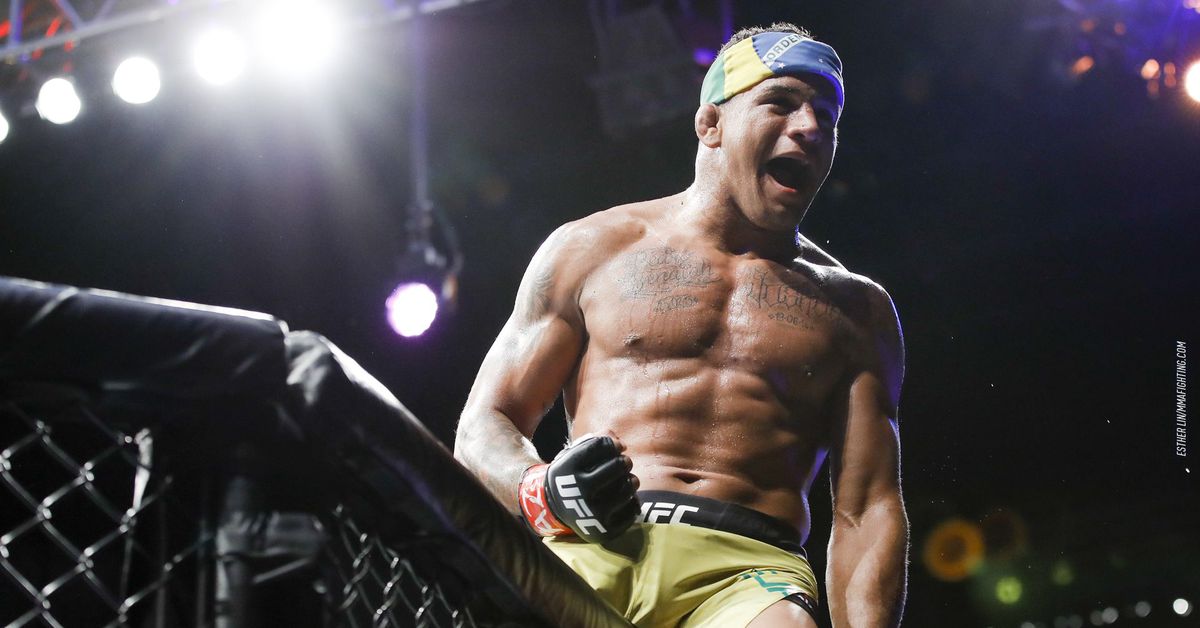 Gilbert Burns wasn’t even 24 hours removed from a first-round knockout over Demian Maia when he tried to book his next fight.

The Brazilian, who is currently riding a five-fight win streak including three straight victories at welterweight, saw the news that Leon Edwards would be unable to travel to the United States for his main event fight against Tyron Woodley due to the ongoing coronavirus pandemic.

In a rush, the UFC attempted to salvage the card that was supposed to take place on March 21 by moving the entire show to a new location in Oklahoma. Considering Burns was still in great shape and he suffered no damage in his fight with Maya, he immediately called the UFC and told them he was ready to fight.

“The fight started to get real,” Burns explained when speaking to MMA Fighting. “The UFC really offered me the fight. I had a flight leaving Brazil on Monday, the UFC changed my flight so I left on Sunday night. I got here by Monday, I was ready to go.”

According to Burns, the UFC’s attempt to put together the fight hit a roadblock when former interim welterweight champion Colby Covington threw his hat into the ring saying that he would also be willing to face Woodley on short notice. The complications grew even greater after Rafael dos Anjos also stated that he was interested in the fight with Woodley.

At that point, Burns says Woodley began looking at his options and he started to realize that the potential fight might be slipping through his fingers.

“Everything was going good until Colby [Covington] started talking a little bit, then the fight turn a little bit towards Colby’s side,” Burns said. “But then he wasn’t cleared to fight and I was cleared. [Rafael dos Anjos] got in the conversation as well. They’re looking for RDA.

“To be honest, Tyron Woodley declined the fight a couple times until he got options. He got Colby, so he’d rather get Colby. RDA got in the conversation, he’d rather fight RDA. But for sure, I was the riskiest fight for him.”

Burns believes the risk outweighed the reward for Woodley when it came to a possible fight against him.

“If we take out Leon Edwards, I was the only guy who had a full camp,” Burns said. “RDA had no camp. Colby had no camp. For sure he don’t want to fight. Towards the end, the RDA needed medicals, I don’t know if he had time.

“The UFC came back to my side and we had the same conversation until President [Donald Trump] spoke and after the president’s speech, everything got cancelled. I was in line to fight Tyron Woodley. I was just waiting to get the contract. The fight super close to being a done deal but the president’s speech, everything got cancelled.”

In the aftermath of the late-notice fight falling apart, Woodley told ESPN that he accepted Burns as an opponent but he was only interested in that fight if it happened that particular weekend.

Burns responded on Twitter by calling Woodley a “liar” while continuing to state that the former welterweight champion had no intention of ever facing him.

Without a doubt, Burns knows he was the worst possible opponent for Woodley on short notice but he still hopes to meet him one day in the future.

“There’s a lot of risk for him,” Burns said about fighting Woodley. “I can knock him out. What’s he going to do? Take me down? And do what? I’m one of the best grapplers in that division for sure. It’s a risky fight. But my management and Woodley’s management, they dislike each other so that conversation might be crazy. I don’t have a lot of clue what he’s talking about but I know they don’t like each other.

Jon Fitch on the current state of MMA: “It’s not even a sport anymore”
MMA world celebrates somber April Fool’s day
Tyron Woodley has given his team permission to accept a fight at UFC 249
Bellator postpones at least three upcoming events
Midnight Mania! DJ Bisping Breaks Out The Jams