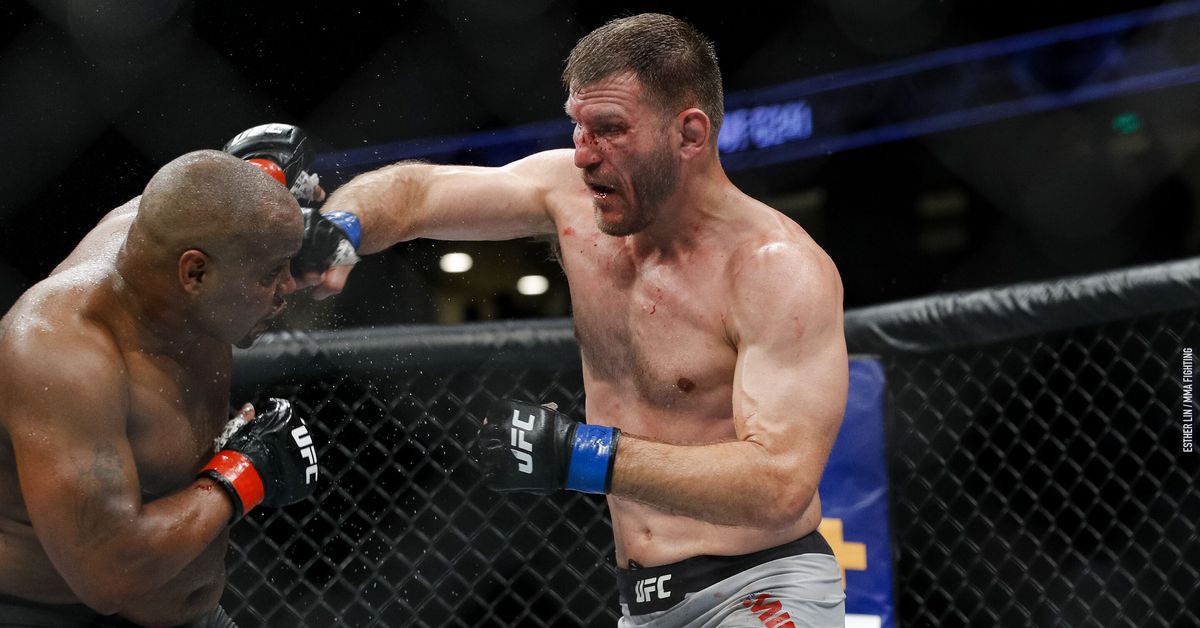 The problem facing the UFC heavyweight champion is a matter of bad timing. First, he was forced to undergo a procedure to repair a torn retina following his rematch with Daniel Cormier last year that put him out of action for several months.

Then just when Miocic started to get his full range of vision back as he returned to training for a proposed trilogy against Cormier, the coronavirus pandemic swept the country and he was forced to follow stay-at-home orders with gyms across Ohio being shut down by order of the governor.

Since that time, Miocic has said numerous times that he plans to fight again as soon as he’s able to put together a training camp but that hasn’t stopped a long list of heavyweights from criticizing him for not returning sooner.

“I don’t know what people want from me really,” Miocic told MMA Fighting. “Everyone’s like ‘he’s holding the division’ and I’m like how am I holding up the division? Other guys are saying ‘we can train.’ Well, good for you. You live in a different state, you have different regulations.

“My coach, no joke, shut his gym down. He wasn’t taking any dudes, no one’s paying anything cause it’s not fair to everyone. They had a bunch of stuff outside the gym and a couple people, like five or six people were working out together, they were even six feet apart and someone saw that and reported it and he got cited by the CDC. That’s how strict they are. So everyone can just shut up cause they’re idiots.”

Cormier has been very vocal about scheduling the trilogy against Miocic with plans to retire afterwards. Just recently, the former two-division UFC champion even sent a message to Miocic on Twitter with a suggestion about how he could build his own training facility at home.

Unfortunately for him, Miocic says he doesn’t spend much time at all paying attention to what Cormier thinks or believes.

“I don’t care. I really don’t care what his opinion is. Never did,” Miocic said about Cormier. “Honestly, he says one thing and then contradicts himself all the time.

“Apparently I’m not a champ. He just calls his own shots. Whatever. Everyone else is talking. Saying vacate or defend. Whatever, I can’t make everybody happy or anybody happy. I don’t care at this point. Stop crying.”

The same can be said for fellow heavyweight Curtis Blaydes, who took to Twitter recently with a message aimed at Miocic regarding his job as a first responder near his home in Cleveland.

In addition to his duties as UFC heavyweight champion, Miocic works as a firefighter and paramedic, which has taken on an even bigger responsibility due to the COVID-19 outbreak.

Blaydes didn’t buy that Miocic couldn’t train properly during the pandemic while also stating that the heavyweight division needs a champion “who’s committed to continually proving he’s the champ.”

While he takes his job as a first responder seriously, Miocic says that even if he quit tomorrow that wouldn’t solve the other problem plaguing his return to action.

“I don’t really care what he thinks,” Miocic said. “What am I supposed to do? We’re in a pandemic. What else do you want me to say? Even if I wasn’t a first responder I still couldn’t train so shut up. Stop crying.”

As the UFC began putting together a schedule to return during the pandemic, Dana White promised that no fighter would be punished for not feeling comfortable enough to compete during a very unusual set of circumstances.

The UFC president later said it was possible that Miocic could be stripped of his title because “fights can happen right now, you either want to fight or you don’t.”

“Listen once I can fight, I’m going to fight. There’s no question,” Miocic said. “We’re talking to the UFC and we’re going to figure out a good date. That’s what we’re doing. We’re trying to figure something out.

“We’re trying to find a good date to figure out what’s a good one to go with, we’re going to go.”

While a lot of athletes are putting together training camps to compete on short notice with many doing so under less than optimal situations during the pandemic, Miocic refuses to short change himself ahead of one of the biggest fights of his career.

He’s already split a pair of meetings with Cormier and the last thing he wants to do is walk into a trilogy feeling like he’s not truly prepared for what lies ahead.

“I’m trying to get back as soon as I can,” Miocic said. “I’m not trying to hold out. I want to fight. It’s not like I’m going three rounds. I’m going five rounds for the heavyweight title. Fighting a really good fighter. I want to make sure I’m ready.”