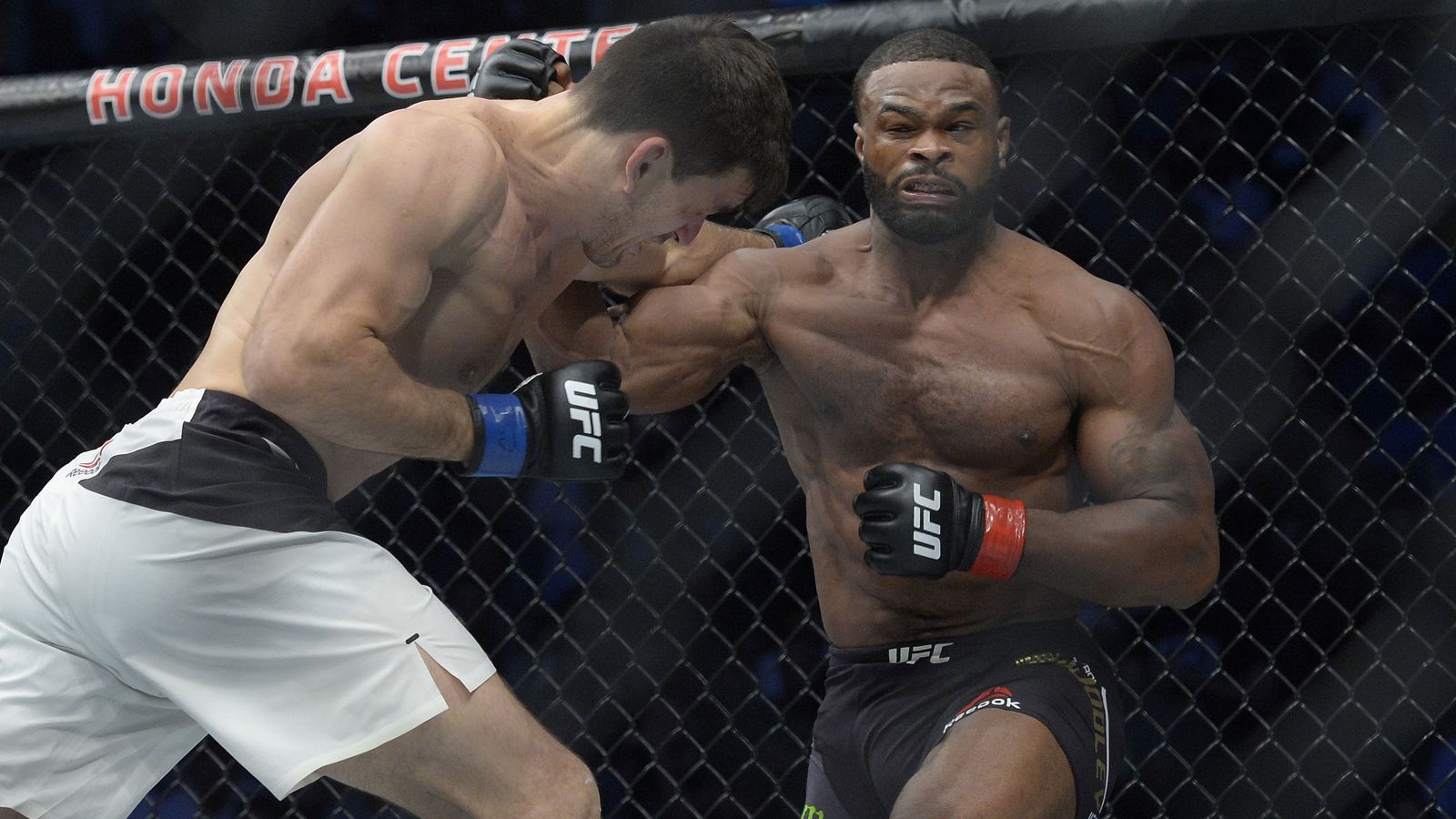 Former UFC welterweight champion Tyron Woodley will be making his awaited return to the Octagon next weekend against Gilbert Burns on May 30 live on ESPN+ from UFC APEX in Las Vegas, Nevada, and “Chosen One” expects it to be a violent affair.

Woodley, 38, will be making his first Octagon appearance since losing his 170-pound title to Kamaru Usman at UFC 235 in March of 2019. Prior to that defeat, Woodley had produced a 6-0-1 record with three successful title defenses since his previous loss in 2014. He was well on his way to becoming the greatest welterweight champion in UFC history behind the legendary Georges St-Pierre.

With more than a year to prepare for his UFC return Woodley couldn’t be more focused. The long-time veteran was hoping to land a grudge match with rival Colby Covington this past March, but a main event clash with a surging contender like Burns will surely suffice.

“What I like about this matchup for me is that it’s a five-round fight,” Woodley said on his Hollywood Beatdown show on TMZ Sports (shown above). “I don’t know if he’s ever fought a five-round fight, but it’s different. It’s different than trying to come out and explode. He goes out there and he either explodes in the first two rounds and then starts to fade in the third or he explodes in first round, the second round is kinda crazy, and then he just lets it all hang out in the third round. When you’re down 3-0 and I’m up three rounds and then you come out and get picked apart in the fourth, then you’re left to desperation. You’re left to swing big and kick big and go for takedowns and I think if anybody in the UFC is gonna have an eyeball to see that sh*t from a mile away, get out the way, and sting you with some shots, it’s me.”

While Woodley remains one of the most successful 170-pound fighters to ever step foot inside of the Octagon he understands that fans only remember what you did last. Because of that, “Chosen One” is ready to get down and dirty in order to remind the masses of the type of athlete and fighter he can be.

“It’s always short-term memory,” Woodley said. “People only remember you for your last outing and it’s been so long ago, it’s time to remind them. . . I’m in a violent headspace. I don’t know another way to put it. I’m willing to do some very sh*tty stuff to people, put them in compromising positions, hurt them. Literally, hurt them, not just go out there and try to get the win. I don’t know if I’ve ever been this focused during my stint in the UFC. I don’t know if I’ve been this ornery. Today I was yelling and cursing at my sparring partners. That’s how I know I’m peaking at the right time. That’s how I know I’m ready to go.”

As far as his upcoming matchup with Burns, who is coming off a first-round knockout finish over Demian Maia back in March (highlights HERE), Woodley is as confident as can be. In fact, he plans on making Burns regret ever deciding to fight him in the first place.

“You can’t miss this. This is going to be a clear case of someone asking for something they didn’t really know what they were asking for,” Woodley said. “I’m gonna let the person talk but when we get in there in the octagon, the performance I put on is going to be crazy. I’m gonna be talking sh*t to him, I’m gonna be pushing him in the face, I’m gonna be punching him, I’m going to deny every takedown, every scramble, and I’m gonna leave him out there and it’s gonna be like, ‘F*ck, why did the UFC match him up with this dude? That’s a mismatch. That ain’t even fair.’ People are gonna feel bad for him.”

Ryan Bader tells Jon Jones he would “love to run it back” in Bellator
In ‘Be Water’, Bao Nguyen looks at the giant shadow cast by Bruce Lee
TUF 5 Provided A Crop Of Entertaining Fighters
Woodley Accepts Covington Fight
UFC on ESPN 9 falls short of SpaceX launch in viewership ratings